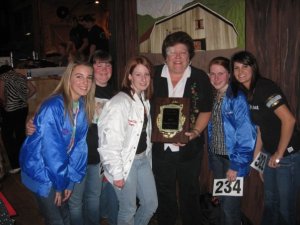 Donna Riley, Director of Peanut City Cloggers was inducted into the 2008 America’s Clogging Hall of Fame.  She was one of the founding members of the Peanut City Cloggers in 1983 and has been managing director for Peanut City on and off for most of its 30 years.   Honoree’s  are selected from those who have clogged for at least 25 years and  have been a “positive influence in the preservation of the dance” for consideration.  Great Job, Donna!

Included in picture are Heather Wilson, “All American”  and Sarah Wollett, “Jr. All American”  for the year 2008. AnnMarie Knight, Teresa Davis and Lindsay Skeen.